Skip to content
No Comments on Kia Motors America & the Orlando Magic Head to the Playoffs!Posted in Brand Awareness, Brand Sponsorhip, Corporate Activations By LinkingPosted on April 28, 2011September 25, 2019

Orlando, FL – Kia Motors America, an official sponsor of the NBA Playoffs this season, invites Magic fans to take a peak at their 2011 Kia Optima while visiting the new Amway Center for the big games. 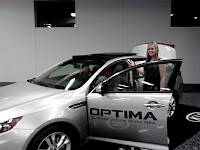 Linking Promotions, our sister company, has coordinated the scheduling of the promotional specialists for the display activation during the entire 2011 season, working in conjunction with the Magic Sponsorship team. Our talent represents the car company in a professional manner to generate awareness about the car and all its advanced features. The basketball fans in attendance have been welcomed to take a look at the interior of the Optima on display, which Linking Events has kept up to perfection, and schedule test drives at a nearby dealership at their convenience.

Our model, Kelly, has enjoyed her experience working with Linking Promotions and Kia.

“Cristina and I have worked pretty much every home game since December, and it’s a lot of fun,” Kelly said. “There’s always something new, and always someone new to talk to.”

Our promotional models have gotten the opportunity to work at the new Amway Center, which held its opening ceremony October 10, 2010. 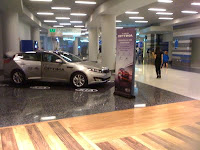 Located in Downtown Orlando, the Amway Center has nearly tripled in size from the original Amway Arena, and can seat 18, 846 people for these games. Along with events, the Amway Arena features artwork and multiple bars that overlook the Orlando skyline.

“The Amway Center is amazing. It is one of the prettiest venues I’ve ever done an event at,” Kelly said. “It’s a great place to just hang out at even if you’re not going to a game.”

Kia Motors America & the Orlando Magic Head to the Playoffs!

Talk to an Event Manager