No Comments on Tampa Bay Buccaneers Begin 2011 Season with Night Practices, Free to PublicPosted in Uncategorized By LinkingPosted on August 8, 2011August 16, 2016

TAMPA, FL — After the lift of the NFL lock-out, the Tampa Bay Buccaneers are preparing for the upcoming 2011 season. Their football season has begun with free fan events including training camps, night practices, and home preseason games verse the New England Patriots and Miami Dolphins. 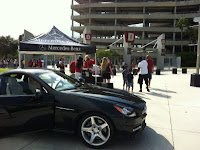 Stationed near the Buccaneers’ night practice location at the Raymond James Stadium is the Mercedes-Benz tent, complete with the sleek 2012 SLK 350 and Linking Promotions promotional staff and Linking Events management. The promotional specialists for the events will be responsible for speaking to football fans about the car on location and collecting leads for Mercedes-Benz. Events for the regular season will take place between the months of September and December, and all the preseason events last through August. 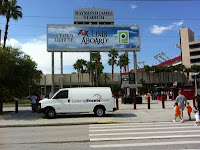 For the third consecutive year, the Buccaneers have opened their training camps to the public at One Buccaneer Place. Fans can expect optimal viewing on Field 3, autograph sessions, free parking, a merchandise tent, discounted concessions, and an appearance from the team’s cheerleaders and mascot, Captain Fear. Also, thanks to popular demand, the Buccaneers night practice happened this past Saturday, August 6th. While weather conditions consisted of rain and heat, the sun eventually came out and so did the fans.

Talk to an Event Manager